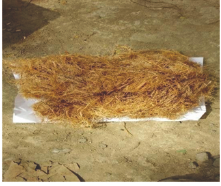 Now a days we are facing Environmental protection problem. Many things, which are invented for our luxurious life are responsible for polluting environment due to improper waste management technique. One of them is banana fibre. To address this issue the fibres from stem fibre of the plant were added in various percentages in M30 Grade Concrete.

This paper describes the performance of Banana Fibre Reinforced Concrete (M30). Experimental work has been carried out on the Specimen like cubes, specimen, and cylinders, which were cast in the laboratory and their behaviour under the test was observed. The Banana fibre was added from o%  to 1.0%. The compressive and Split Tensile Strengths of Concrete were determined after 7, 14 and 28 days period.

Musa sapientum, which is commonly called banana is a herbaceous plant of the family Musaceae. The plant is cultivated primarily for its fruits and to a lesser extent for the production of fibre. The Musasa pientum grows up to a height of about 2-8m with leaves of about 3.5m in length. Considering the upsurge in the prizes of livestock feeds and their increasing demand, this study was conducted to provide information about the chemical composition, nutritional and anti-nutritional qualities of Musa sapientun peel, which is often ignored and considered as waste could be domesticated for proper utilization as livestock feeds.

With the decrease in availability of lime and considering the environmental effect of cement, it has become necessary to find a replacement in terms of binding material at some proportion. Banana peel can be termed as a waste material if not ceased for further sterilization.

Banana fibre Concrete plays a vital role in the construction work and as the Rates of cement & other constituents are increasing day by day, waste products can be a good form of replacement.

Outsourcing has been very less on the subjected topic but experimental work has been done on various cultivators of banana fibre for Physical & Chemical Properties of its stem & Peel.

There has been a lot of research on natural fibres in concrete.Natural fibres are generally preferable as it is easily available and economical. In our work, after investigating the physical and chemical properties of different fibres, we found banana fibres to be suitable enough to be used for the production of concrete  Though, the extraction process is relatively expensive. But Useful applications of such fibre would regularize the demand, which would be reflected in a fall of the price. Banana fibres are generally lignocellulosic material. A high cellulose content impart desirable mechanical properties for banana fibre. Lignin also plays an important role in the natural decay resistance and also work as a retarder in the concrete matrix.

The Ingredients used for this experimental work are Ordinary Portland Cement Conforming to IS: 12269-2013, River Sand, Crashed Aggregate of 20mm, Potable water, and Banana Fibres of length 10-20mm with the aspect ratio of 200 – 500. The Physical and Chemical properties of the above ingredients are computed as per the Standard test Procedure and following references prescribed in BIS. The Obtained values are shown in tables.

The concrete mixture was prepared by adding banana fibre at the rate of 0%, 0.5% & 1.0% by weight of Cement. The Specimen without Fibres were cast for reference specimen.