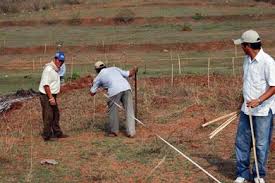 In a geographically vast country like India, land types differ from one region to another. The same is true of the measurements used to size them up. While globally recognised measurement units are used in sale and purchase of flats across India’s major markets, buyers often get boggled by the local measurements units involved in land purchases. Now, we bring you the different land measurement units commonly used across the country.

Here are some of the globally used measurement units, used in India as well.

Square foot (sq ft): This is the most commonly used unit, especially in India’s urban housing market. Under the Real Estate Regulation Act (RERA), builders have to use square foot as the standard benchmark for flat sizes. Getting this unit right is crucial to imagine the space. While you could arrive at the right size after doing some calculation, the best way is to imagine the space covered when you are standing on your feet.

Square metre (sq mt): This is another common benchmark which is equal to 10.76 sq ft.

These units are often used to measure land in the eastern states of India.

Dhur: Used in Uttar Pradesh, Bihar, Jharkhand and Tripura, dhur denotes varying sizes depending on the specific state. In Bihar, it stands for over 68 sq ft of space while in Tripura it denotes 3.6 sq ft only.

These units are often used to measure land in the northern states.

Gaj: A gaj is the Indian equivalent for a square yard and stands for 9 sq ft. This unit is commonly used in Delhi, Punjab and Haryana.

Bigha: This is the most widely used measurement unit, applied across states including Uttar Pradesh, Bihar, Assam, West Bengal, Madhya Pradesh, Punjab, Haryana, Himachal Pradesh and Uttarakhand.  Do note that the unit size in bigha differs from state to state. Typically, 4-6 bighas of land makes up for an acre of land.

Biswa: This unit is also used in Uttar Pradesh, Punjab, Haryana, Uttarakhand and Himachal Pradesh. Depending on the state, one biswa could be from 50 to 150 square yards.

Biswani: Uttar Pradesh, Punjab, Haryana, Himachal Pradesh and Uttarakhand use this unit with various values attached to it. Typically, 20 biswanis make up for a biswa.

Killa: In Punjab and Haryana, an acre of land is known as a killa.

Kanal: In Haryana, Himachal Pradesh, Jammu & Kashmir and Punjab, 8 kanals make up for an acre.

Ghumao: In Himachal Pradesh, Haryana and Punjab, an acre is also known as ghumao.

These units are often used to measure land in the southern states.

Kuncham: Used in Andhra Pradesh, a Kuncham is equal to 484 square yard.

Ground:  Ground stands for 2,400 sqft and is used in Tamil Nadu for land measuring purposes.