Educational programmes on the careless use of flammable materials in Forests - Posted on: 2020-02-06 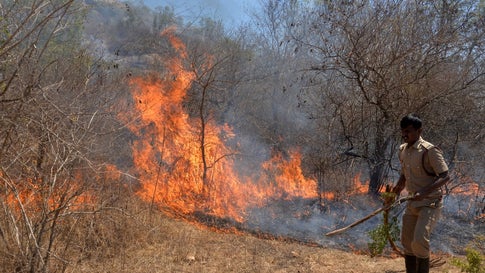 Save forests from smokers and bonfires

Hyderabad: While it is a well-established fact that cigarettes are harmful for the human lungs, they are worse for the state’s green lungs (forests). According to officials of the Telangana State Forest Department, unstubbed cigarettes and beedis along with manmade fires or bonfires are the leading causes of fires damaging the state’s forests.

The situation gets worse as the summer season approaches.

According to officials of the department who say that fire prevention should now be accorded highest priority, there are 1,106 areas in the state’s forestscape that are prone to fires. “We have to be vigilant to prevent any fire from breaking out. Forest officials must stay alert and stop the accident before it happens. Even fire department officials will be on standby to douse any blaze in the forest,” said  principal chief conservator of forests R. Sobha.

While some fires break out naturally, such as when dry twigs rub against each other due to the wind, there are more anthropogenic reasons for the fires, officials confess.

“More often than not people start a fire, to keep wild animals at bay. When they start the fire they do not think of putting it out. Sometimes they cook on forest land, and sparks fly in the air. There are close to 24 villages around the Nagarkurnool area, and most of their inhabitants do not have a toilet. They tend to head out into the forest to answer nature’s call,” DFO Nagarkurnool, Mr Joji, told Deccan Chronicle.

Another reason for fires breaking out, he said, was the occasional cigarette lit by tourists, who don’t put it out completely. “We have stopped people from collecting beedi leaves. Why?The collection of beedi leaves has been banned,” he added. Worst of all are those light fires for a video that they can then post on social media, Mr Joji said.

The department will now hold educational programmes at check posts aimed at discouraging the careless use of flammable materials.

India in safe hands, your bravery is supreme: PM Modi to Indian Army at Ladakh