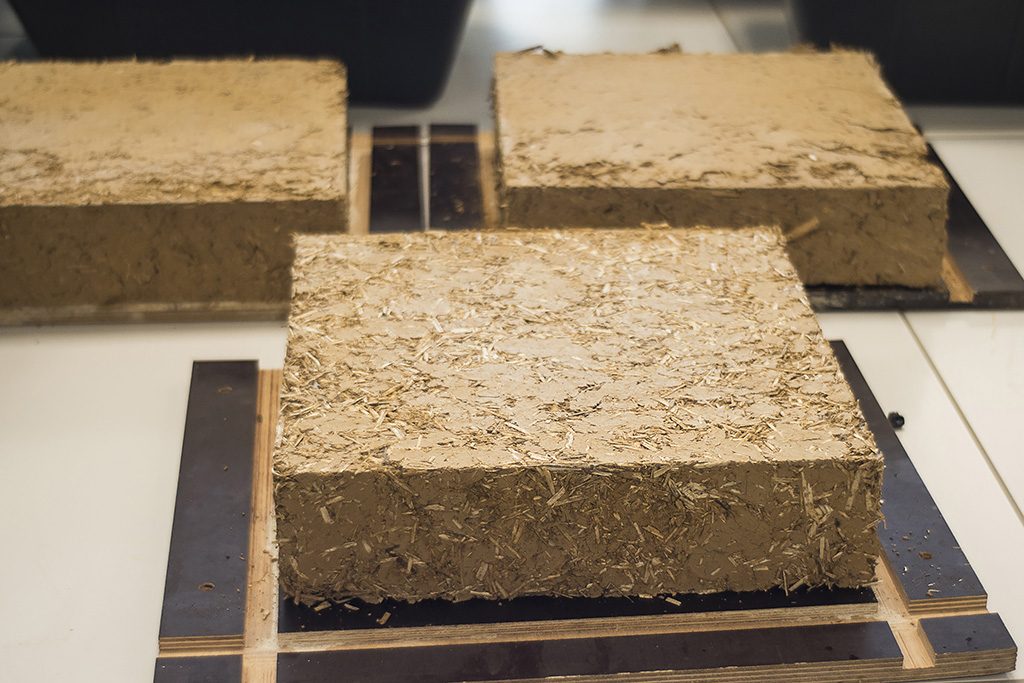 Historic portraits look down from the wood-panelled walls of the lecture hall at the Royal Institution of Chartered Surveyors (RICS). Before them stands a large red and brown block – a section of wall fashioned from a composite of clay and straw derived from hemp.

At first glance it might seem that Construction News has wandered into an academic seminar on medieval housebuilding materials, but the upright slab is in fact part of a 21st-century initiative.

“We’re very confident that this will be fundamentally cheaper than traditional forms of construction”(Matthew Fox, Plymouth University).

The prototype for a new form of a cob house wall – created by the CobBauge project with the help of a €3m grant from the European Union – revives an ancient building technique that has sustainable construction potential.

It’s tempting to take such initiatives with a pinch of salt – Construction News receives a steady flow of emails from companies claiming to have found a zero or low-carbon answer to the industry’s unsustainable practices. But despite such evidence of widespread innovation, very few construction projects seem to be making serious use of these alternative materials.

We spoke to those behind a variety of sustainable building materials and questioned industry figures to assess whether this buzzing niche is about to burst into the mainstream.

Plymouth University research fellow Matthew Fox is among the team working to bring the cob approach of mud and straw to the mass market. He highlights how the method fully embraces the circular economy principle.

“The idea is that you excavate for the foundation on the site and all of the material that comes out is enough soil to be able to build your external wall,” Mr Fox says. He adds that this would be possible with the clay-rich soils found across roughly a third of the UK.

In terms of sustainability, cob ticks many boxes. Firstly, it represents a very low level of embodied carbon. This metric is becoming widely used to determine the environmental impact of projects, reflecting the sum of carbon emissions released during manufacture, transportation and construction, all the way from raw materials to the finished form.

Derived from earth, straw and water, cob requires none of the CO2-intensive processes required to produce steel, cement or concrete.

“An extra day’s curing on a 40-storey building is eight weeks on the programme, which clients will find unpalatable” (Andy Butler, Multiplex).

Being low-carbon, the method is extremely cost-efficient, according to Mr Fox. “We’re very confident that this will be fundamentally cheaper than traditional forms of construction, particularly if you’re sourcing the soil from the site,” he says.

“You won’t be paying for soil to be taken off site either, which is an additional cost that most construction projects face when digging foundations.”

Challenges faced by the CobBauge project include the fact that traditional cob buildings don’t fare well with thermal-certification processes, as the energy passing through their walls fluctuates dramatically according to both internal and external conditions.

To counter this problem, those working on the project have developed a dual-layered wall using a thick clay to provide the strength needed to support the structure and a thinner one for insulation, which doubles the energy efficiency.

Following the launch event at RICS, the project is moving on to its prototype stage, with a full-scale house set to be completed at the University of Plymouth by next summer.

If clay-based construction brings to mind the domed desert huts of Star Wars, Cambridge Carbon Capture (CCC) has gone full sci-fi in seeking a ‘silver bullet’ solution to greenhouse gas emissions that aims to kill two birds with one stone.

The company says its technology can capture CO2 emissions from heavy industry, such as cement and steel manufacturing plants, and convert this waste gas into a mineral by-product that permanently stores carbon dioxide.

CCC chief executive Michael Evans says the company is collaborating with international building material supplier CRH, parent company of Tarmac, to develop a construction material from this mineral. Heathrow is apparently looking at it with interest, as it seeks to minimise the environmental impact of the airport’s planned expansion.

National Grid is also financing a trial of the company’s extraction technology, capturing CO2 from some of the utility company’s operational emissions.

Multiplex technical director Andy Butler says contractors do take new sustainable materials seriously, but they typically face a trade-off with cost or time that makes them difficult to adopt.

He uses the example of a well-known cement alternative, Cemfree: “It’s a great product – you get all the strength of normal concrete. But the curing times are a lot longer, which will reduce your cycle time.

"For a contractor like us, which does a lot of high-rise, an extra day’s curing on a 40-storey building is eight weeks on the programme, which clients will find unpalatable. That sort of material-type issue [is] a very common conversation we have. Invariably it falls away because projects are awarded [based] on the lowest cost and fastest programme.”

“They’re building an 18-storey building in Vancouver out of timber. The last time I checked, Canadian fire codes were at least as stringent as ours” (Rory Bergin, HTA).

Another thing that has slammed the brakes on the industry’s willingness to experiment, according to architect Rory Bergin, sustainability head at design firm HTA, is safety. The Grenfell Tower fire, as well as blazes at housing blocks in Barking and Surrey, have called into question the safety of a slew of construction materials.

He says: “The industry was already pretty conservative, but right now the industry is ultra-conservative. So the willingness of anybody to look at new materials, or new untested materials, is almost nil.”

Mr Bergin cites timber as a readily available material with low embodied carbon impact that is now being widely shunned amid the post-Grenfell caution.

“Used responsibly, timber can be very effective,” he adds. “In Canada, they’re building an 18-storey building in Vancouver out of timber. The last time I checked, Canadian fire codes were at least as stringent as ours. We have to be just a little bit more science-based in our assessment of problems.

“This is more about an attitude than around the technical properties of alternative materials. And I think, in terms of government and regulation, we need to be driven a little bit more by sustainability concerns.”

CCC’s Mr Evans acknowledges that it is tough to bring a new construction material to market, but he believes that his company holds several trump cards.

Addressing the issue of fire safety, he says a product of his company’s CO2-removal process is a slurry; once applied to a block of the same plastic foam insulation used in the Grenfell Tower and left to dry, this material was able to withstand a blowtorch at 1,800°C for 10 minutes with no damage other than slight discolouration.

The company is also preparing to launch a crowdfunding campaign called ‘We Want to Borrow a Power Station’. Its aim is to showcase CO2-removal technology at Fiddlers Ferry coal station before it stops operating in March 2020. The audacious stunt could give CCC the launchpad it needs, to show whether it can perform at scale.

“It would demonstrate not just to the power industry, but also to the cement industry, the steelmaking industry, these heavy emitters, that there is a technology that uses known, established processes to solve the CO2 problem,” says Mr Evans.

“Not only that, it demonstrates to the general public that the solution is out there, which puts pressure on the industry to actually start investing in these sorts of technologies.”

With contractors ramping up their carbon commitments amid bleak climate warnings, you might think now is the right time for the industry to embrace sustainable alternative materials. But this will also require a re-evaluation of how projects are procured.

Multiplex’s Mr Butler suggests that embodied carbon should become as much a pillar of clients’ and developers’ contractor-selection process as cost and speed. However, government intervention may be necessary to force the issue, given their lack of appetite for either delays or expense, coupled with a tendency to stick with what’s familiar.

Mr Butler has worked in London for 40 years and can name just three clients that have engaged in a “serious conversation” about embodied carbon: Derwent London, British Land and Landsec.

As is often the case, it may be that top-down change is necessary for the industry to embrace sustainable alternatives, just as European CO2 targets backed by massive fines have forced the pace of fuel-economy improvements within the automotive sector.

Given that the government has set a 2050 net-zero target, one approach would be to penalise developers that failed to adhere to a clear set of environmental standards, including embodied and whole-life carbon. As well as levelling the playing field, such action could also provide a meaningful, industry-wide wake-up call.

Often cited for its exemplary sustainability practices, Skanska is now leading the way in the use of recycled plastic bottles – by transforming them into roadside kerbs, as part of a trial in partnership with Hampshire County Council.

The company behind the technology, Durakerb, says that the material weighs 90 per cent less than normal roadside kerbs and is more durable, too.

To date, 365 km of Durakerb has been installed in the UK, using 72m plastic bottles and saving 12m kilos of emitted carbon dioxide.

Although the product is more expensive than a traditional kerb, founder Phil Sutton has noted an uptick in interest among contractors since former prime minister Theresa May pledged that the UK would be a a net zero carbon country by 2050. The announcement has led to increased awareness and more companies measuring their carbon footprint, he says.

“We’ve banged that drum for many years,” Mr Sutton says.

“I think over the next 12 to 18 months we’ll start to see a lot more of this becoming mainstream - carbon footprints being really analysed in detail.”

"Alarming Rates Of Transmission is a wake-up call for all of Virus In Europe": WHO

Till Medicine Is Found,social distancing is the most effective weapon against the virus: PM Modi