Lots of female chief executive officers have stories about conquering adversity. Radhika Gupta's begins when she entered the world with a broken neck.

The birth complication left Gupta's neck with a permanent tilt, a feature that at times had an impact on her self esteem but has now become a source of inspiration for doing things differently. At 36, she has already set up India's first domestic hedge fund and become the country's only female head of a major asset manager.

Gupta's latest superlative, launching India's first exchange-traded fund for corporate debt in December, is part of her ambitious plan to increase Edelweiss Asset Management's client assets from about $4 billion to more than $40 billion by 2025.

"It gives you something," Gupta said of her life's ups and downs, including the complication at her birth. At the very minimum, "it gives you a good story to tell."

Born in Pakistan, where her Indian diplomat father was posted, Gupta spent her childhood wherever he was serving at the time.

From studying at an international school in Nigeria with the daughters of warlords to trying to fit in with rich adolescent girls in America, it was a steep learning curve grappling with new languages and cultures. At first, she was self-conscious about her neck, but over time she learned to accept it as part of what makes her unique.

Yet despite passing with top honors, when it came to campus recruitment, she was repeatedly rejected by consulting companies. At one point, she said she even contemplated suicide.

"This was a horrible phase," Gupta, relaxed and talkative, recalls from her brightly lit office, which has a print of Vincent van Gogh's "Starry Night" on the wall behind her desk.

The turning point came when she interviewed with a McKinsey & Co. partner who happened to be a tournament-level bridge player. The game is known for its older fans, but Gupta had taken it up when she was 12 at the insistence of her parents. She and the partner bonded over their shared hobby, and she got the job.

After 1 1/2 years at the consulting company, Gupta left to join AQR Capital Management, the $186 billion investment firm co-founded by Cliff Asness. But just as the global financial crisis was unfolding, Gupta felt an urge to start out on her own.

In 2009, she, her husband Nalin Moniz and a colleague from AQR decided to go back to India to start Forefront Capital Management, with the princely sum of 2.5 million rupees ($34,000). They focused on alternative investments, a new phenomenon in India at the time. In the process, they set up the country's first domestic-registered hedge fund.

In 2014 they sold the firm to Edelweiss Financial Services, with Gupta taking a post at the company and going on to become CEO of Edelweiss Asset Management in February 2017. Since then, she's built assets under management to 300 billion rupees, in businesses including mutual funds, alternative investments and portfolio-management services. That's up from about 80 billion rupees when she took over. 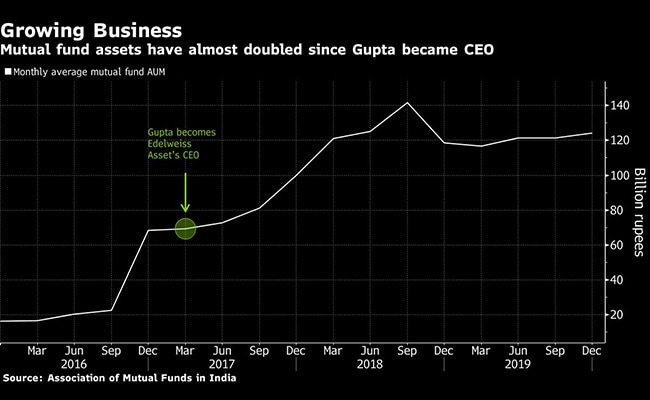 Radhika Gupta and her staff are seeking to increase the company's assets under management to 3 trillion rupees by 2025.

So it created a stir when the government chose Edelweiss to manage its first corporate debt ETF, beating four larger players. Gupta said she made 50 trips to New Delhi since getting the mandate in January 2019 to speak with government officials, index providers and state-run borrowers to get the product design right.

The ETF collected more than 120 billion rupees at launch, 1.8 times the base subscription, with about 55,000 retail buyers. It listed on Jan. 2 and has since grown in size. The expense ratio of 0.0005% makes it one of the world's least costly funds of this type. Finance Minister Nirmala Sitharaman announced plans for a second ETF in the budget, this time comprising government debt.

Gupta and her staff are seeking to increase the company's assets under management to 3 trillion rupees by 2025, or about $41 billion. But it won't be easy for Edelweiss to break into the top bracket as the industry is fragmented and top-heavy, according to Value Research Ltd., a mutual fund advisory firm.

"Although there are no big negatives about the money manager, their funds haven't done exceptionally well," said Dhirendra Kumar, chief executive officer of Value Research. "By launching unique products like the ETF, Radhika is trying to make Edelweiss a meaningful player and get the business going."

Gupta says doing things differently is a key part of her firm's strategy, and that launching the debt ETF is a step in that direction.

In addition to running Edelweiss, Gupta has become a public speaker. A YouTube video of one of her talks, titled "The Girl With a Broken Neck," has been viewed more than 110,000 times. Gupta speaks passionately about how she came to terms with her birth complication, saying that at one point she even feared losing weight because it would show the tilt. She also speaks about the time she considered suicide, saying all of these moments in life, both good and bad, should be processed and accepted, because they define who people are.

Four In 10 People Worldwide Confined In Some Form

Nobody will be left hungry: Relief package announced by the Modi government

China on Wednesday lashed out “neither created the Corona virus nor intentionally transmitted it”.