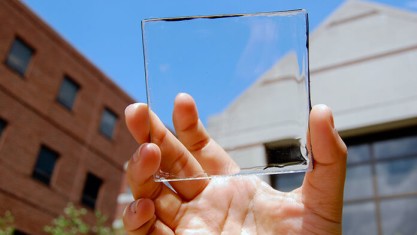 New solar panel technologies are set to transform the global solar energy landscape. Some of these promising technologies are already in the advanced stages of development and could hit the market fairly soon. With these innovations, solar is no longer going to require extensive land parcels or unsightly roof spaces. (Aesthetically appealing and highly efficient solar shingles, for example, are already creating attractive solar roofs.)

What are transparent solar panels?

Researchers at Michigan State University (MSU) originally created the first fully transparent solar concentrator in 2014. This clear solar panel could turn virtually any glass sheet or window into a PV cell. By 2020, the researchers in the U.S. and Europe have already achieved full transparency for the solar glass.

These transparent solar panels can be easily deployed in a variety of settings, ranging from skyscrapers with large windows to a mobile device such as a phone, a laptop, or an e-reader. As these solar power windows can simply replace the traditional glass windows in offices and homes, the technology holds the potential to virtually turn every building in the United States and the world into a solar producer.

How do solar panel windows work?

A transparent solar panel is essentially a counterintuitive idea because solar cells must absorb sunlight (photons) and convert them into power (electrons). When a solar glass is transparent, the sunlight will pass through the medium and defeat the purpose of utilizing sunlight. However, this new solar panel technology is changing the way solar cells absorb light.

The cell selectively harnesses a portion of the solar spectrum that is invisible to the naked eye, while allowing the normal visible light to pass through. To achieve this technological wonder, the researchers have developed the transparent luminescent solar concentrator (TLSC) rather than trying to do the impossible by creating a transparent photovoltaic glass cell. The organic salts absorb UV and infrared and emit infrared processes that occur outside of the visible spectrum so that it appears transparent. | Diagram: ExtremeTech

The TLSC is composed of organic salts that are designed to absorb specific invisible UV and infrared light wavelengths, which then glow (luminesce) as another invisible wavelength. This new wavelength is then guided to the edge of the window plastic, in which thin PV solar cell strips convert it into electricity.

Once the mass production begins for transparent solar panels, researchers estimate that the TLSC should be able to deliver an efficiency of about 100 percent. This may not appear to be an earth-shattering number, but on a national or global scale, when almost every window in a home or office building consists of clear solar panels, the results can be transformative.

As the transparent solar panels cost comes down with their mass production and deployment, this non-intrusive technology can be scaled right from commercial and industrial applications to handheld consumer devices, while remaining very affordable.

A German manufacturer, Heliatek Gmb, has developed this partially clear solar panel, which can absorb about 60 percent of the sunlight it receives. Compared to the conventional solar PV cells, the partially transparent solar panels have lower efficiency at 7.2%. However, solar power generation can be increased by adjusting the balance between the sunlight that is transmitted and absorbed.

For instance, in south-facing glass buildings, it is often important to reduce the transmitted light (many such office buildings already use tinted glass). In these locations, the partially transparent solar panel can work very well.

As described at the beginning of this report, researchers at MSU have already achieved a breakthrough to produce fully transparent photovoltaic glass panels that resemble regular glass. Researchers estimate the efficiency of these fully transparent solar panels to be as high as 10% once their commercial production commences.

It’s vital to understand here that when it comes to solar panel windows, the efficiency of the panel is not the be-all and end-all. In practical terms, a less efficient solar window only means that the window has to be larger in size compared to the more efficient panel in order to generate the same amount of electricity.

Once fully transparent solar panels get integrated into large windows in buildings, their lower efficiency is bound to be overcompensated by their potential scale of deployment.

Solar power panels are designed to harvest sunlight to produce energy, while the essential function of window blinds is to block direct sun’s rays from entering inside. Solar panel blinds are cleverly combining these two divergent functions. An innovative startup called SolarGaps has introduced solar panel blinds, which it claims can cut down energy costs by up to 70 percent. For every 10 sq. ft. of window space, these solar window blinds can generate 100 watts of power (you could roughly power three laptops with this much electricity).

These solar blinds can be installed either inside or outside, and you can control their angle and positioning using an app that will also inform you of the energy generation figures. It includes a setting to automatically optimize the angle of the blinds according to the position of the sun.